Ary and the Secret of Seasons launches September 1. To prepare for the adventure, we had the opportunity to talk to Exiin CEO and Ary Creator Sebastien Le Touze.

Keep reading to hear about the development process behind Ary and the Secret of Seasons and to see plenty of amazing concept art. If you want to see all of the concept art available, follow this link: http://modus.games/ary-art

Please tell us about your studio and Ary and the Secret of Seasons.

Exiin is a small studio based in Brussels, Belgium. We’re in the heart of Europe and our team represents it well, with employees diverse in nationalities and gender.

With Ary and the Secret of Seasons, we are trying to bring back the spirit of gaming classics from the 90’s and early 2000’s. The challenge is to give the game a feeling that is strangely familiar but at the same time different enough that players don’t feel like they’ve played that game 100 times already.

How much time went into development?

I started the project by myself at the end of 2016. At first, I had the concept of changing seasons, then I started on the gameplay. When our artist Kwanbo joined, he pulled from his own culture all the Korean inspirations the game has.

Our team is pretty small; we have between 5 and 10 people working full-time on Ary, including Fishing Cactus that is in charge of the port for consoles. At eXiin, with such a small team, we end up having people that do a bit of everything. One day you can be working on level design, the day after do some cutscenes and the next day some shaders. Thankfully we also get a lot of help from our producer (Bruce Hayles) at Modus. From what I’ve heard from other fellow indie developers, it’s something quite rare to have a producer that lifts up the team. That’s something we are very grateful for.

Which games had the most influence on the making of Ary and the Secret of Seasons?

The main inspiration is Soul Reaver from Crystal Dynamics, but it doesn’t stop there. Ary is inspired by all kinds of games released between 1995 and 2005. You can see a bit of Zelda: Ocarina of Time, Mario 64, some Banjo and Kazooie or some bits of Jack and Dexter and even Tomb Raider. In short: It’s inspired by the titles I grew up with!

How much emphasis is put on the story/storytelling?

More than expected. The game has a lot of cutscenes for an indie game, and with a tiny team we managed to make a lot. In fact, more than half of our team was dedicated to animation, which is 3 or 4 people! After a few months of prototyping the game, we had a vague story drafted, and it was later that we got the full narrative in place.

Once we’d finished the backbone of the story, we started to work on the dialogues, and then we started with the cutscenes.

We worked a bit backward with the cutscenes; basically, one of our artists was doing the storyboard based on the script, then we were doing an animatic following the cutscene. Once the animatic was validated, we used temporary dialogues to place the timing for the dialogues. Once that was done, we had the actors recording variations of their lines and then our animators had to sync again on the animations. Finally, we did the lispync on it.

How did the season gameplay come to life? What were some difficulties in figuring how to make it work?

I wanted to come up with something new to 2020, yet familiar. That’s when I recalled a small project I had as a kid toying around with RPG Maker 95. I ended up with a small seasons-shifting RPG — nothing fancy, just a nice idea. Twenty years later, I wasn’t the first nor the last one bringing the idea of seasons as a gameplay mechanic — lots of other games did it before us, but none of them I saw took advantage of the concept in 3D!

The first big question was how to bring a concept that worked well in 2D to a 3D world, which is how we arrived at the idea of localized seasons, displayed in a sphere. It was a good starting point — shifting seasons to reveal 4 different worlds. As a fan of Soul Reaver, it was hard to resist the idea!

Our biggest fear with the season switching was making it a gimmick.

To avoid that pitfall, we focused on three core concepts in our game: exploration, puzzles and combat — and made sure the player has no other solutions than to use the seasons’ powers to complete these tasks.But, as a trade off, we enable players with unlimited use of their powers.

One concept that perfectly illustrates the integration of this idea is the jelly enemies. They can be turned into ice cubes and used as a platform to reach higher places or transformed into a box that can be used to replace Ary’s weight on a pressure plate. 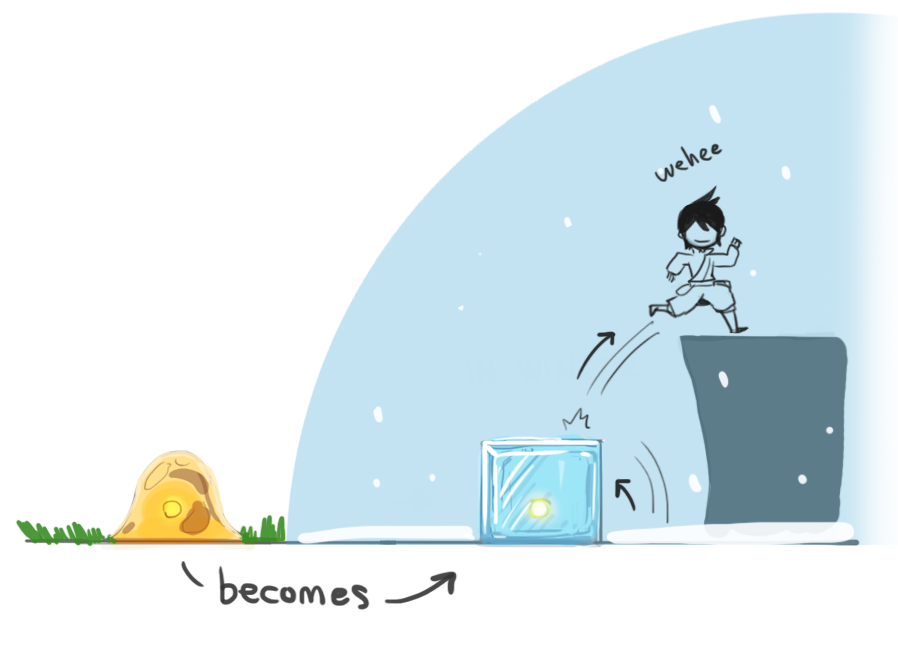 Ary and the Secret of Seasons has won many rewards, what would you advise other developers to focus on or tips to obtain the awards? How has it impacted the project?

It’s hard to say. For me, awards are interesting for our peers in the industry, but don’t mean anything for players.

Most awards require the dev or publisher to register or nominate themselves, and then you need to be there to get the prizes, this adds a certain weight on the development budget. I know some fellow developers spending their days going all across the word to get nominations and prizes. I have to admit it’s comforting and gives a great thrill, but at the end of the day we need to see if it’s an added value to have the prize for the “best story told only with vowels” or “best game featuring small hands.”

What were some of the team’s challenges met during COVID and how did you overcome them?

We’re based in Belgium, a tiny country that was at the top of the list of the countries impacted by COVID-19.
We didn’t want to risk anyone’s health so we had some of our team members going into lockdown ahead of the government decision. The impact seems harmless at first, but when you are finishing a game and realize that every employee has various internet speeds, it starts to get complicated. The general productivity decreases and when you’re shipping a game, slow internet is never good.

For instance, to test a build internally it used to take about a minute to download a few gigs, but with our current constraints it takes up to 4 hours just to download it. Test two builds and the day is gone.

Same with communication — everything just slowed down a bit.

But I guess it was hard for everybody. No management book has a chapter about “what to do in case of global pandemic.” Up to this day, we still pay a heavy cost from the COVID outbreak.

How important was it to find the right composer for the soundtrack?

Having a composer that understands what you want is more than essential, and they need to get what makes your project special. Working with Marcus Hedges has been more than easy; I think out of the 35 tracks he composed, I’ve refused one as it didn’t match 100%, but it was so good that it got repurposed for the Autumn region. Most of the music he made got accepted on the first try. Would have been a blessing if the entire project would have gone as smooth as that!

Any fun stories or tid-bits of production you want to share with the fans.

During the voice casting, I was not convinced with any of the performances we got of prince Crocus. But I had a hunch when I listened to one of the voices from a completely different character. We then asked this mysterious guy to try out for Crocus, and that’s how Chris Zambelis landed one of the two lead roles.

One of the boss fights didn’t pass our quality filter, and we decided to remove it so we could better focus on the rest. However the music created for it was so good, that I created overnight an entire level, just to save that music.

Tags Ary and the Secret of Seasons Behind the Studio with Finish Line Games